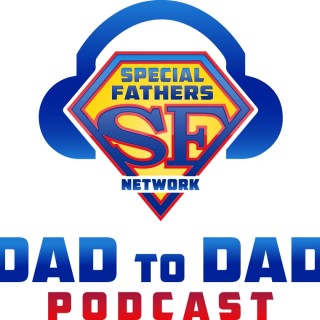 Welcome to the Dad-To-Dad Highlights Podcast presented by the Special Fathers Network. Here’s a brief overview of host David Hirsch’s decades long commitment to fathers as well as snippets from some of the couple of dozen Dad to Dad Podcast interviews.

In 1997, David formed the Illinois fatherhood initiative. The country’s first statewide, not for profit fatherhood organization. The initiative was so successful. David earned himself a guest spot on the Oprah Winfrey show.

Oprah: This is David Hirsch, Illinois thought on that initiative. See, I think fathers don’t know, I’ve done lots of shows about deadbeat dads and, and all those reunion shows the message over and over again from the men.

I think they don’t realize the void and the whole that they leave children benefit dramatically from the involvement of a positive male adult. It’s just men being involved in children’s lives your own children, as well as reaching out to those that are really in desperate need.

Tom Couch: In 2015, David felt a calling to make a bigger commitment.

He created the 21st Century Dad’s foundation to further call attention to the issue of father absence. Also that year David created and rode in the dad’s honor ride a 21 day 2300 plus mile ride from Santa Monica to Chicago. Arriving at us cellular field in Chicago on father’s day for an on field presentation before a white Sox baseball game.

Reporter: 24 million kids across America are growing up without dads. David Hirsch wants to change that. So he wrote from Santa Monica to Chicago to support local charities that help dads become more active in their kids’ lives. The purpose for the ride is to honor dads, to raise awareness for the local charities, the charities, along the way, and to raise some resources for those charities.

So he rode. And rode and relative to more.

Tom Couch: More recently, David and the 21st Century Dad’s Foundation devoted their energy to creating the Special Fathers Network, a dad to dad mentoring program for fathers raising children with special needs. And from that Rose the Special Father’s Network podcast, where David Hirsch talks with exceptional fathers of kids with special needs and explores how these dads have made a real difference in other people’s lives.

Here’s a brief sample of what some of these bad sounds.

He regard speaking as his best friend. That’s pretty powerful. And that’s been the greatest joy of my life for the last 15 years. I tell people that one of the blessings of having a son with autism. I’m the only dad, I know who’s 25 year old. We’ll give him a full body hug. So every person that’s part of our effort is called an angel.

The idea is that everyone’s Ainsley’s angels. You know, I kind of fell into this fire service. I’ve always believed in helping people. It was somewhere in programmed in my DNA that, you know, you got to give back to people in spite of all the nightmares that were in the beginning of our story, we feel so lucky to be where we are.

This was my therapy. Well, after Lexi died was to. Put together this nonprofit and to make a difference in improving the comfort and quality of life for children with special needs and the theme of moment be we all have needs, whatever it is, diabetes sickness, we all have needs, but some are more special than us.

We wanted to create a very good ice cream shop that happens to employ people with special needs, but it’s gotta be good ice cream since 2010, we, it over $2 million of research. If you put the best interest of your child first. You’re never wrong. It’s a simple idea. The more you do for others, people need to see and feel that there’s some hope in their, in their journey with autism.

His challenges is going to be hardships is going to be infinite amount of sacrifice that you’re going to have to make, but the rewards are so profound. We hear stories all the time. People coming out of the hospitals. And being told they’ll never do sports again, or they’re never walk again or in they’re just wrong.

I thought back to what the doctor had said, mr. Page, he’s never going to walk. This kid is running a race and he won the race.

David Hirsch: Dick pushed his son, the entire distance in his wheelchair. And after the race. Rick, the son says to his dad when I’m racing, it says if I don’t have disabilities, but the Boston marathon has a wheelchair division.

Dad: So we applied through them, but they also tend to stop saying, no, you’re different than us. You can’t run into, let’s see David Chappelle the wheelchairs themselves, but I was pushing wreck. Right. What they did say is if you want, you can line up behind us and run. And that was in 1981. So we’d lined up behind them and the wheelchair behind the wheelchair.

Yes. Yes. And we ran, but we ended up finishing our first marathon in three hours in the 18 minutes. Holy moly. 85% of all the other runners is more than just a movie and television actor. He is a special person helping special people with autism. And I’m the luckiest reporter on earth because he’s my dad, that’s me and Mantegna from a video interview.

David Hirsch: With her father, Joe.

What is your proudest achievement in dealing with autism?

Today’s certainly one of them. I mean, this was going to come right up there. I mean, the fact that I can sit here and be interviewed by you and be part of the seclusion news interview is a very proud moment for me.

Tom Couch: And now we open a new chapter in the Special Fathers Network, announcing the dad to dad, Facebook group, where fathers of kids with special needs can share their experiences with other member fathers.

And in honor of this new group, we’re changing the name of our podcast to the dad to dad, podcast, fathers, mentoring, fathers of kids with special needs. David will still talk to incredible dads and hear their incredible stories just with a new name. So we hope you join the Facebook group and continue to enjoy the dad to dad podcast from the Special Father’s Network.