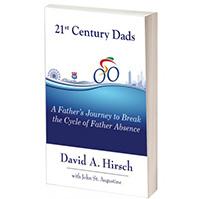 21st Century Dads: A Father’s Journey To Break The Cycle Of Father Absence

For David Hirsch, the Dads Honor Ride was a daunting 2,300 mile, 21 day journey to honor dads and raise awareness for the importance of fathers and father figures. With an estimated 24 million kids growing up without their dad in the home, the ripple effect is a higher incidence of drug and alcohol abuse, incarceration and crime, depression, and suicide. The cycle of father absence is devastating the lives of countless youth, crushing families and crippling communities.

With passion, discipline and courage David takes us along on the Dads Honor Ride journey from Santa Monica to Chicago.  He shares personal reflections about overcoming fear, his struggles to find his identity, forgive his own absent father, and break his family’s cycle of father absence.  More actuary than athlete, David pushed himself past his own limits and in doing so crossed paths with sages, saints, and veterans, as well as dads of different backgrounds and discovered the road to fatherhood is filled with potholes, flat tires, wrong turns, and closed roads that all contain valuable lessons.  Hoping to shed light on the dark statistics that are the children of absent fathers, David has become a formidable voice for 21st Century Dads.

All proceeds from the book go to support the 21st Century Dads Foundation.

Read what others are saying about 21st Century Dads — A Father’s Journey to Break the Cycle of Father Absence.

Whether it was in his role as founder of the Illinois Fatherhood Initiative or as a father himself of five great children, David understands the critical importance of the role fathers play in the lives of the young. The journeys he has taken and shares in this book, both as a community leader and on his bicycle across America, offer pertinent lessons about the rich experiences that dads can provide to their kids when they are involved. Fathers from all backgrounds will find great comfort in the simple wisdom David provides in this outstanding read. Bravo!”

David Hirsch continues to bring his indispensable message of the role Dads play in the 21st Century. It spells bright future, and we are grateful that David changes lives!

Having cycled across the country more than 85 times, including Route 66 dozens of times, I know first hand the challenges David encountered. Riding 100 miles a day for three weeks takes a level of commitment and perseverance few possess. I admire his Dads Honor Ride accomplishment and more importantly, the commitment he brings to bridging the gap for those growing up without dads.

Special pricing for orders of 25 or more.  Please email rsvp@21stCenturyDads.org.