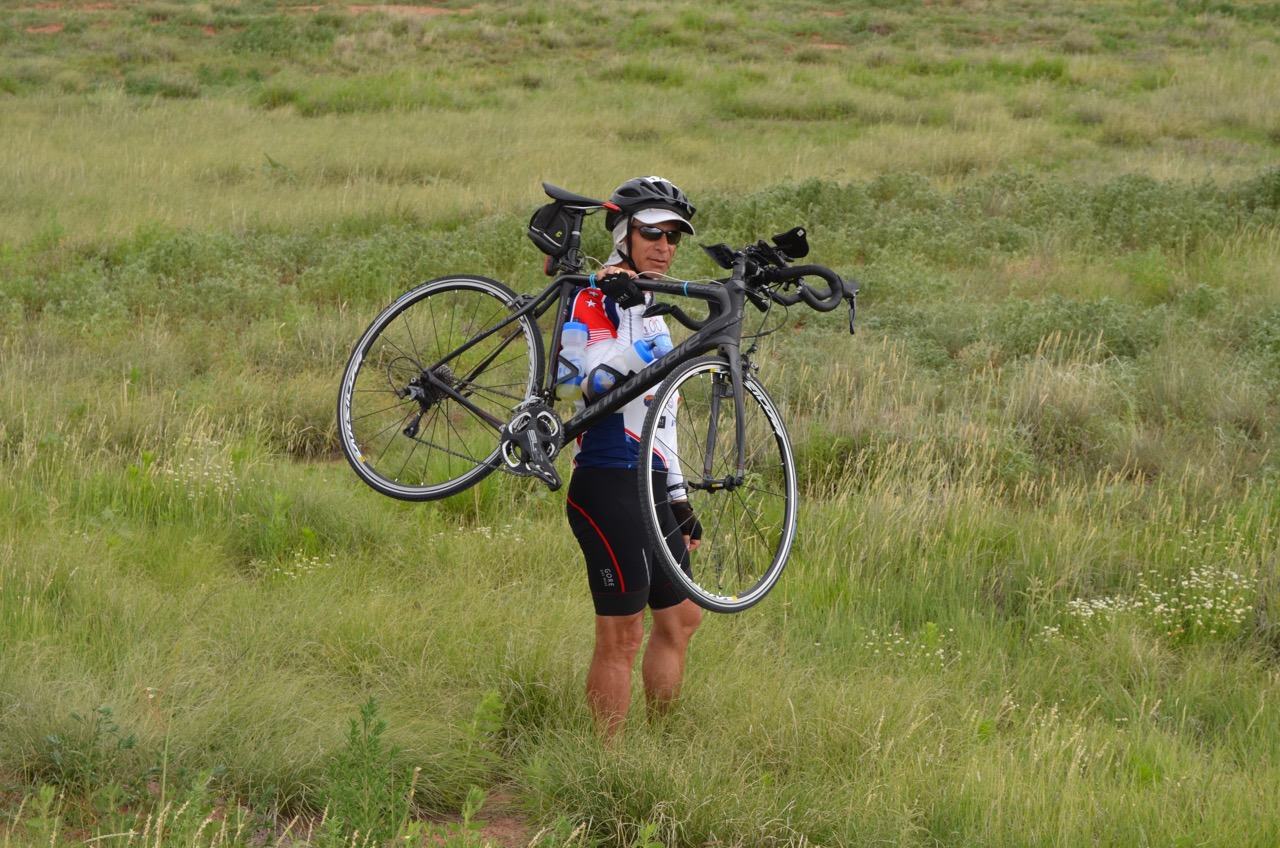 Riding conditions were good and we were making good progress until Route 66 became
and very old and bumpy road. We had to hoof it over to US 40 and jump the barb wire
fence to continue the journey on US 40. I had a random encounter with a young lady
and her grand uncle and made a Great Dad Coin presentation at the NM/TX boarder.

I’m pleased to report we passed the halfway point of the Route 66 ride from Santa
Monica to Chicago, which is officially marked in Adrian, TX about 50 miles west of
Amarillo.

While at the Route 66 Mid Way Cafe, we honored more than a dozen dads, including
Mike Cruz, a solo Route 66 rider from San Diego, a group of three Austrians riding
their Harley’s from Chicago to Santa Monica and a host of random dads from all over
place who happen to be there at the same time.

Young Dave also flew in to Amarillo and made the 50 mile ride from Adrian to
Amarillo today.

We were tempted to go for the 72 oz steak deal at the Big Texan, but good sense
clicked in and we decided to have more moderate meals and sit at the bar and watch
the Blackhawks game. At the Big Texan we honored no fewer than a dozen more men,
including officer Mike Martinez of the Amarillo Police Department.

As I reflect over the past week, the first 1,200 miles have been a thrill. The
temperatures have been more accommodating than anticipated with only 2-3 days in the
100 degree neighborhood. We’ve had mostly cross winds and tail winds, which you
learn to appreciate after battling some strong headwinds. The elevations in CA and
AZ were a good challenge, particularly the switchback climbs up to Prescott and
Flagstaff. The stunning views and magnificent sceneries were the rewards during and
after the long climbs.

Another obstacle has been the amount of flats. In the first 10 days I’ve had 9 flats
and the other riders have had their fair share as well.

Thanks to everyone who has helped make the Dads Honor Ride 2015 possible, especially
my wife Peggy for covering the home front, my CS colleagues at work, the riders and
crew, and so many who have generously supported the DHR financially.

I’ll just head back over this way to the US 40.

After presenting Great Dad Coins to the Austrians.

Connecting with the News Channel 10 shooter along the road.

A classic photo at the Cadillac Ranch with young Dave.

With officer Martinez, Wilk and YDH

All in all, one of the best overall days of the ride.