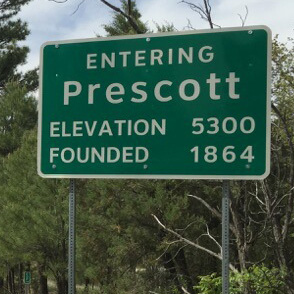 Greetings from Cottonwood, AZ.  The day started out on a precarious note.  Google Maps took us up a dirt road for about five miles before we sent an SOS.  Addie and Wilk came to the rescue in the RV to bring us back down to the main road.

The ride out of Cottonwood was easy going until we got to the foothills leading up to Prescott.  After riding up a slight incline for a few miles we entered the switch back area that took us up to Yarnell, elevation 4,850.  After riding at that elevation for 10 miles, and experiencing flat number two it was up the steep switchbacks to Prescott.

We weren’t in Prescott for more than 10 minutes before we met passerby, Tim Parker, who is the executive director of the Set Free Center (www.SetFreeCenter.org), a Christian-based drug and alcohol counseling program that serves 4k teens/year.  He’s a father of four kids 12-37 years old and former Marine.  We presented him with a Great Dad Coin and he presented me with a Armor of God coin and Wilk with one of his USMC coins.  Both he and Wilk had tears rolling down their cheeks.  It was quite moving.  After a brief prayer it was back on the road and more hills.

We entered the town of Jerome after sundown and then rode 12 miles down to Cottonwood with the aid of a headlamp and the headlights of the RV.  Shortly after our arrival in Cottonwood we got together for dinner with Andrea Burd, a cousin who moved to AZ 14 years ago, who lives in nearby Cornville, AZ.

All in all it was a good, but long (slow) day logging another 111 miles, bringing the total distance traveled to 505 miles.

Great fauna and a reason to stop, take a photo and rest for a mom

Another flat, but with great scenery.

With my favorite youngest daughter.

Presenting Tim Parker with a Great Dads Coin. Then surprised to receive an Armor of God coin in return.

Armor of God coin received from Tim Parker, to help protect us during our journey.

12 miles per hour on average. It was a very lloooonnnngggg slow day.