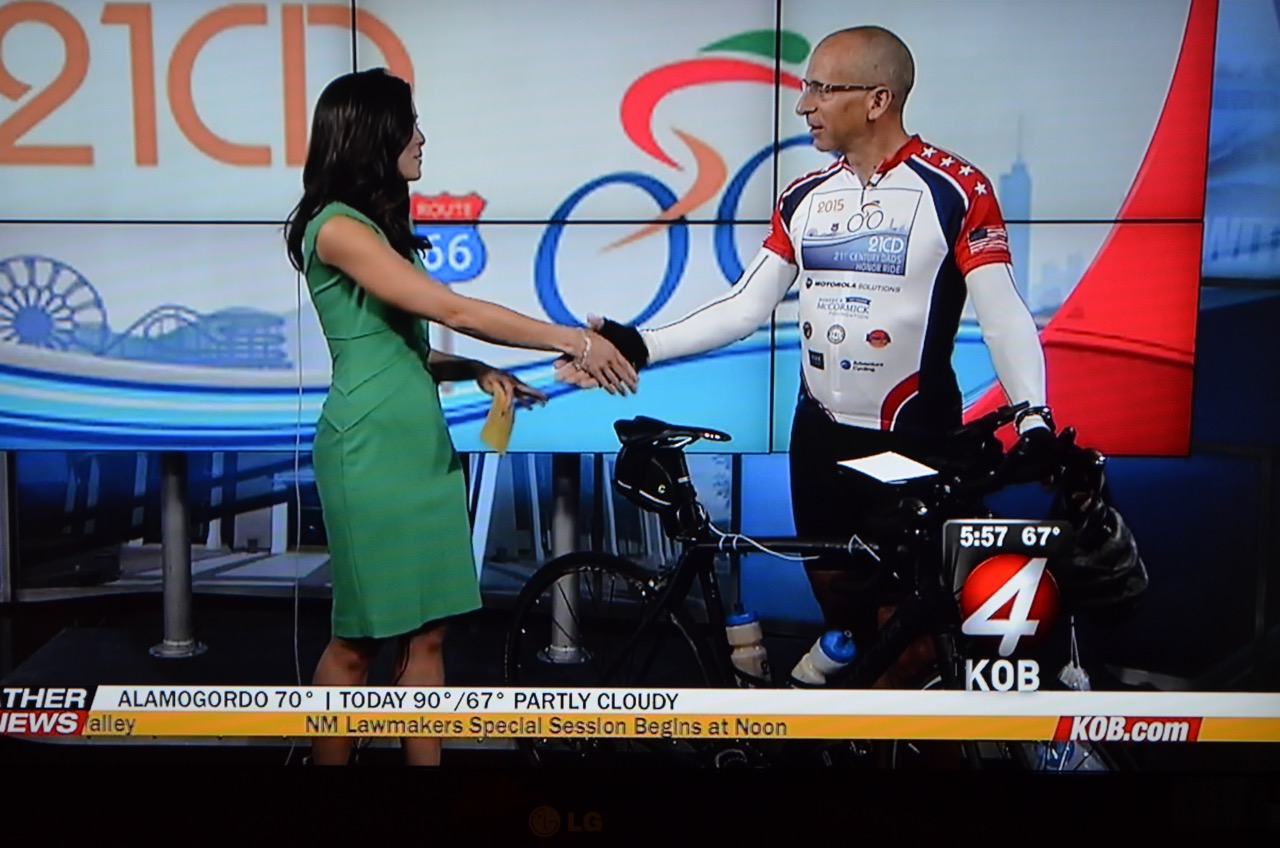 I got up at 4:45am and biked, in the dark with a headlamp, a few miles (not included in the total miles for the DHR), over to NBC4 for a 5:30am appointment. The in-studio interview with Kim Tobin went well and I got back to the hotel by 7:30 for a bite to eat and to hit the road for Santa Rosa. Getting out of Albuquerque proved a little more challenging than expected.

I felt a little vulnerable navigating the expressway, so I decided to take some bike paths and local streets. Getting up early also set me back from an energy perspective. My legs felt heavy and unresponsive. At one point, 20 miles into the ride, I felt the need to dismount, sit down against a tree and began feeling a little out of it. Just then Clarke Garnett, one of my high school buddies, called with some very sad and tragic news. He told me Leslie’s 22 year old daughter, Madeline, had committed suicide, two weeks earlier. He had not remembered I was on the ride until I mentioned were I was. The message served as an instant wake up call, to stop feeling sorry for myself and to get on with the ride. It was an official God moment.

It wasn’t long thereafter, it began to rain cats & dogs and hail. Withe support vehicles miles ahead, I ducked for cover under some trees and bushes until the storm subsided. It didn’t rain for more than 2 hours, just enough to make sure I was soaked all the way through….. Hours down the road, we had an encounter with biker Mike from Oklahoma City, who was also a Vietnam veteran…. Due to the late start time, lousy riding conditions, weak legs, and the fact that tomorrow was scheduled to be relatively short (60 mile) day, we decided to pack it in early at 84 miles and drive the last 44 miles to Santa Rosa. Today was definitely a low point for a number of reasons, but tomorrow’s another day.

In-studio at NBC4 in Albuquerque.

Taking a break and enjoying a Dr. Pepper with Lincoln.

Ready to hit the road again.

Only lasted for a couple of hours.

We had a gourmet lunch at Subway and presented a couple of Great Dad Coins.

Biker Mike from OKC with Lincoln after receiving his Great Dad Coin.